After the Earthquake: the Struggle to Transform Haiti

Haiti Liberte journalists and activists discuss the hopes for the popular movement that has survived decades of dictatorship, coups, and occupations, as foreign and domestic forces scramble to fill the void left by the January 12th, 2010 earthquake.

Co-sponsored with the English Department at UVM and funded in part by the James and Mary Brigham Buckham Fund. Also sponsored by the Global Justice Ecology Project, the International Socialist Organization, Will Miller Green Mountain Veterans for Peace, and the Vermont Worker’s Center 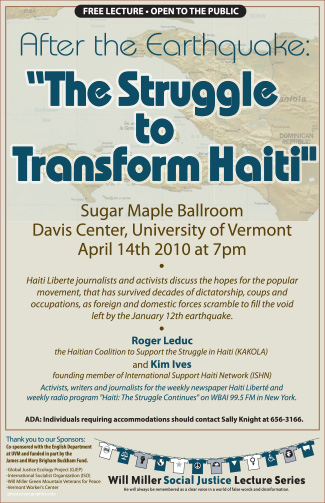 Video Playback
After the Earthquake: the Struggle to Transform Haiti